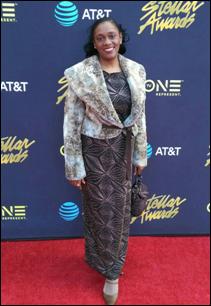 The UK gospel scene is gearing up for the new album from one of its leading figures: Dawn Thomas Wallace.

Entitled Live in Luxembourg, the album was recently released on Zoe Records and features some of Dawn's favorite gospel songs and includes classics like We Are Not Ashamed by Andrae Crouch, Jesus Will by James Cleveland, new worship songs like He Made a Way by Travis Green, I Know Who I Am by Sinach and Jesus Christ is the Way by Walter Hawkins.

Dawn shared, "I am really excited about this album. I spent a lot of time choosing songs which I felt would really strike a chord and convey a strong gospel message of love, hope and salvation. These songs have meant a lot to me over the years. We Are Not Ashamed, the Gospel Medley and Jesus Christ is The Way are songs I have loved since a child growing up in church and deliver a powerful message of God's love for us all."

The album was recorded in front of a packed audience who were excited about seeing Dawn perform live. She feels the album captures the positive energy that flowed during the recording. She said, "It was a joyous occasion to share these songs with the people of Luxembourg. It is my prayer and hope that these songs will reach a new audience. COVID-19, has caused great alarm and fear in so many people throughout the world and during this lock down I want to give people hope."

Dawn has a special place in the British gospel scene.

In the 1980s, which is described as the 'gospel age' of UK gospel, Dawn was a member of one of the genre's leading groups, The Trumpets of Zion (ToZ). They were known for their powerful voices, dramatic delivery and memorable performances. They blazed a trail.

Although Dawn is now a renowned soloist, she looks at her time with the Trumpets of Zion fondly. She shared, "It was a great time. The ToZ were part of a movement of UK Gospel artistes that were heavily influenced by American artistes, and were given opportunities to perform around the UK.

Dawn is the daughter of Bishop and Mrs U. T Thomas and, together with her three siblings, served at Faith Temple Church of God, Slough, for many years.

Music has played a major role in Dawn's life and church is where she honed her musical gift of singing; along with Winsome (sister), Monica and Pauline (cousins); Tony, Samuel (brothers) and Lloyd (cousin) - who were the musicians of ToZ.  The group were heavily influenced by the music of Andrae Crouch and especially the Clark Sisters.

When ToZ disbanded, in the early 1990's, Dawn found herself at a crossroad. But, when she visited churches and was asked to sing the response from the audience made her realize she needed to get back to doing what she felt called to do - sing Gospel.

Now a recognized soloist, Dawn has performed throughout the UK, Switzerland, Italy, Germany, Portugal, Denmark, Barbados, Australia, Indonesia and the home of Gospel music - the USA.

In 2017, as part of Zoe Records rosta of artistes, Dawn traveled to America and performed at the annually held Gospel Music Workshop of America, which is the world's largest gathering of Gospel music artistes and practitioners.

Dawn recalled the reception she received. "Prior to performing at the GMWA, I had visited America several times and had performed in churches (small and large). It was exhilarating to perform at the world's leading event for Gospel music and to be appreciated and respected by renowned Gospel artistes and promoters. I in turn honored them, because they had paved the way for artistes like me, here in the UK, with their glorious music and great songs."

When not performing, Dawn works as a Music Teacher, in Hertfordshire, leads singing workshops and is part of the worship team at her church. It is her desire that the album touches the hearts and souls of people who hear it, and plays a part in raising awareness of the beauty and power of Gospel music here in the UK.