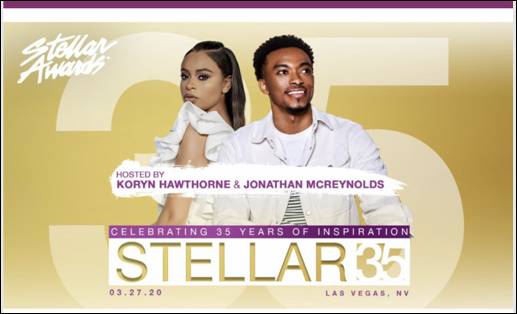 Chicago, IL – February 12, 2020 -- The Annual Stellar Gospel Music Awards is back at the Orleans Arena in celebration of its 35th Anniversary. The show will be taped in front of a live audience and will be hosted by Jonathan McReynolds & Koryn Hawthorne. Annually, the Stellar Awards recognizes the accomplishments of Gospel music icons and individuals instrumental in advocating for Gospel Music.

Don Jackson, Founder of the Stellar Awards and Chairman of Central City Productions, Inc. commented, "I am elated to celebrate this landmark 35th year of the Stellar Gospel Music Awards. Our flagship show is now one of the longest-running nationally televised African American awards programs in history. We are proud to honor Gospel music artists and industry professionals for their priceless contributions to Gospel music. We look forward to another spectacular weekend of family-friendly entertainment in Las Vegas."

In addition to celebrating the year's best album releases, Jackson will bestow special honors upon Gospel greats who have elevated the genre. This year's James Cleveland Lifetime Achievement Award will honor none other than the iconic Clark Sisters - Karen Clark Sheard, Dorinda Clark Cole, Twinkie Clark and Jacky Clark Chisholm -- who hold a collective fifteen Stellar Awards, in addition to the Thomas Dorsey Most Notable Achievement Award (2007).  Additional special honorees will be named at a later date.

The Stellar Awards show taping will return to The Orleans Arena in Las Vegas on Friday, March 27, 2020 and is open to the public, with ticket prices ranging from $50 - $200 at   www.ticketmaster.com  . The week's activities begin with the Stellar Gospel Radio Awards & Showcase, held on Thursday, March 26, honoring top radio stations and announcers serving urban Gospel music audiences, followed by the 2020 Stellar Gospel Music Awards Pre-Show to showcase non-televised award winners. Public tickets for each event go on sale Saturday, February 1 and can be purchased at   www.ticketmaster.com/www, thestellrawards.com .