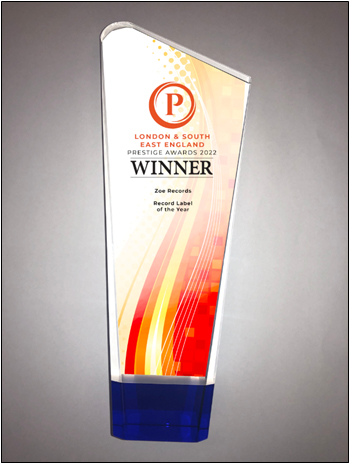 London, England – January 24, 2023 -- Zoe Records UK has been given the award of Record Label of the Year by the Prestige Awards and Best Gospel Record Label by SME News UK Enterprise Awards for 2022.

Over its 24 years of existence Zoe Records UK has won several awards as a pioneering record label which produces and promotes Gospel Music in the United Kingdom, in Europe, in Africa, Asia and in North America.

In 2018 Zoe Records UK was awarded the Legendary Award for its longevity in the Gospel Music Industry by Praisetek Gospel Music Awards.

Zoe Records artists have won several groundbreaking awards including Lola Godheld who won the first and only Dove Awards (organized by Gospel Music Association in the United States of America) by a Black British artist in 2011 for the Urban Recorded Gospel Song of the Year for her song Wait on the Lord.

Zoe Records UK continues to make strides in the global music industry with its catalogue of about 800 audio tracks and 300 videos. Zoe Records UK is probably the only record label in the world with 800 gospel music audio tracks and 300 Gospel music videos from artists originating from Europe, Africa, The Caribbean, Asia, and North America and continues to make strides and have impact in the entertainment industry through it's daily Radio show Zoe UK Sound of Gospel Radio show, The Annual Freedom Festival, the bi-monthly artist showcase Zoe Nites, it's Exhibition of Black British history and UK Gospel music history in Libraries, Community Centres and other public places and it's various music releases.